Switch to the dark mode that's kinder on your eyes at night time.

Switch to the light mode that's kinder on your eyes at day time.

Switch to the dark mode that's kinder on your eyes at night time.

Switch to the light mode that's kinder on your eyes at day time.

BENGALURU: As the new deadly killer strain of coronavirus (Novel Coronavirus or nCoV) continues to spread havoc across the world, health experts say there are already other and equally worrisome communicable diseases affecting the population and they need urgent attention.

Although the primary goal currently should be to prevent the entry of nCoV into the state and the country, the government also needs to tackle other communicable diseases, especially H1N1 (or swine flu) and tuberculosis (TB) that are still widespread and have killed many people in the last six years in Karnataka.

However, although nCoV is new here and the panic surrounding it understandable, people must not forget that equally dangerous H1N1, Nipah and Zika viruses and Severe Acute Respiratory Syndrome (SARS) outbreaks have been controlled earlier, say experts.

Diseases affecting the respiratory functions have posed a big threat and TB is one of them, according to Dr Nagaraja C, Director, Rajiv Gandhi Institute of Chest Diseases.

“Ending it has only been a distant dream. Every minute there are three deaths across India. Fighting TB has to be our priority and a lot of work needs to be done,” he asserts.

The disease seems to have developed resistance to antibiotic treatments.

The concern over TB and other communicable diseases has prompted Union Finance Minister Nirmala Sitharaman to promise in her budget speech on Saturday that machine learning and artificial intelligence would be used in the Aayushaman Bharat scheme to tackle the diseases and come up with an appropriately designed preventive regime.

“With its highly contagious nature — no vaccine yet to prevent it — there is anxiety over the outbreak of nCoV which has entered neighbouring Kerala through travellers who are infected in China. But there are no local cases of the virus yet nor are there any deaths attributed to it so far in Karnataka and the rest of India. But communicable diseases like H1N1 or swine flu are still widespread and have killed over 250 in the last six year in Bengaluru alone,” according to Dr Satyanarayana, Head of Pulmonology and Sleep Medicines, Manipal Hospitals.

A communicable disease is one that spreads from one person to another through a variety of ways that include contact with blood and bodily fluids, inhaling an airborne virus from an infected person’s sneeze or cough, or by being bitten by a carrier insect.

Acute respiratory infections, often triggered by pollution, poor hygiene and bacteria, were the top diseases accounting for nearly 70 per cent of all communicable diseases in India in 2018, with pneumonia being the biggest killer infection, according to the National Health Profile (NHP) 2019.

Other than respiratory infections, communicable diseases like HIV/AIDS have continued to be a cause of worry in Karnataka. It stood fifth among states in terms of the number of cases in 2019, although adult HIV prevalence has declined compared to 2006.

The communicable airborne H1N1 has been an epidemic which has occurred and recurred. Though the number of cases reported is always high, the mortality rate has come down compared to 2009 (during its outbreak) and again in 2015 (when it re-emerged).

H1N1 has influenza-like symptoms including fever, cough, headache, muscle and joint pain, sore throat and runny nose, and sometimes vomiting or diarrhoea. It spreads from one person to another and can worsen the underlying chronic medical conditions.

The numbers available with the Bruhat Bengaluru Mahanagara Palike’s public health information and epidemiological cell for the year 2019 indicate that more than 50,000 patients visited hospitals with positive cases of H1N1 and at least 500 died in the last five years in Karnataka, according to an officer of the cell.

Dr Arunkumar of Manipal University, says, “H1N1 cases may be under-counted. More data on the various detected strains of influenza will lead to the development of better vaccines.”

He says the influenza virus has surface cell proteins called antigens. When the human body encounters the virus either through vaccination or infection, the immune system identifies the antigens and produces antibodies to fight the infection.

The antibodies that remain in the body also fight off any subsequent infection by a virus with an identical antigen. However, influenza viruses often find a way around. … Vaccination is the best way to prevent the occurrence of influenza viruses, he advises.

A senior doctor from the Department of Health and Family Welfare, asserts that most communicable diseases are treatable.

“A disease like gastroenteritis could be treated, but if a patient contracts H1N1, it could spread unless he or she is given appropriate treatment. The patient could spread it to anyone in the community,” he says.

A report released by the Union health ministry shows acute respiratory infections — also commonly known as ‘viral fever’ — contribute the most to the burden of communicable diseases, followed by acute diarrhoeal disease (21.8 per cent and typhoid 3.8 per cent).

Common cold or seasonal virus are lesser cause of worry. The disease is self-limiting.

“When it is just viral infections, patients get better by themselves and don’t come back for follow-up treatments” explains the senior doctor.

There has been an increase in the number of cases of rhinovirus infections in immuno-compromised patients.

“They are the ones who have undergone solid organ transplants. I see at least four such cases a month,” says Dr Satyanarayana.

The only way to deal with the outbreak of any communicable disease is to not panic, but ensure efforts to prevent it. Vaccinating against influenza is the best way to stave off airborne viruses, doctors say.

“The ideal time to take the vaccine is November, but then it can be taken round the year and anyone above six months (of age) can take it once a year,” suggests Dr Vinay D, Consultant, Infectious diseases, adult vaccinology. 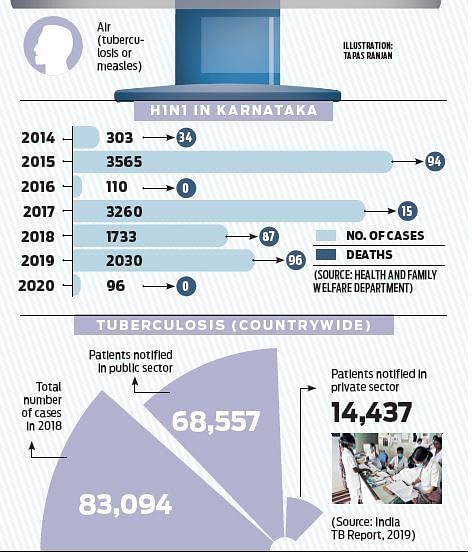 *This story/news has not been edited by karwar.net staff and is auto-generated from a syndicated feed.

THE SERVICE AND CONTENT FROM OR THROUGH THIS SITE ARE PROVIDED “AS-IS,” “AS AVAILABLE,” AND ALL WARRANTIES, EXPRESS OR IMPLIED, ARE DISCLAIMED (INCLUDING BUT NOT LIMITED TO THE DISCLAIMER OF ANY IMPLIED WARRANTIES OF MERCHANTABILITY AND FITNESS FOR A PARTICULAR PURPOSE). THE INFORMATION HEREIN MAY CONTAIN BUGS, ERRORS, PROBLEMS OR OTHER LIMITATIONS. THE OWNER OF THIS SITE ASSUMES NO LIABILITY OR RESPONSIBILITY FOR ANY ERRORS OR OMISSIONS ON THIS SITE.

Hey Friend! Before You Go…

Get the best viral stories straight into your inbox before everyone else!

Get the best viral stories straight into your inbox!

Send this to a friend